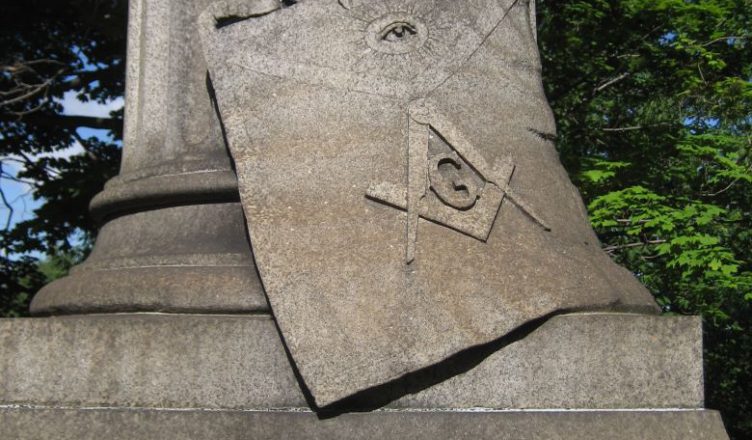 Freemasonry, rich in symbolism, has had centuries to develop symbolic embellishments for its many ceremonies and levels of proficiency. Masons or Freemasons are a fraternal organization that originated in the thirteenth century. Mason’s ranks include Entered Apprentice, Fellow Craft and Master Mason.

The masonic compass and square are one of the most common symbols seen in the cemetery representing Freemasons. The architectural tools are said to serve as a reminder to masons that balancing ones own needs and acting truly towards others will lead to a life of integrity.

The “G” centered in the compass has multiple meanings depending on the context. The most common is that the “G” stands for God. Another meaning is Geometry.

There are specific lots in some cemeteries reserved for Masons–such as the Dade lot in Key West Cemetery at bottom, left.

The symbol for a Royal Arch Mason is a keystone surrounded by the letters HTWSSTKS. The letters stand for “Hiram, Tyrian, Widow’s Son Sent to King Solomon.”

Scottish Rite Masons insignia is a double-headed eagle with the number 32 or 33 on or above it. Scottish Rite is one of the bodies of Freemasonry that a Master Mason may join to further their exposure to Freemasonry.

A Mason’s wife, sister, mother or daughter was sometimes specially recognized with the acronym “FNDOZBTKC MR YA” which refers to the biblical verse, from the book of John 12:15 “Fear Not Daughter of Zion, Behold, The King Cometh.” “AMRY” is an anagram for Mary.

Other masonic symbols may include the sun, winged hourglass, all seeing eye, crescent moon with stars, anchor, urn, book, and a ladder.

Shriners International is a spin-off from Freemasonry–they adopt Masonic principles of brotherly love, relief and truth.

Shriners serve in several meaningful and mission critical roles in support of Shriner’s Hospitals for Children–one of the largest pediatric sub-specialty healthcare systems in the world.

While not all Masons are Shriners, all Shriners are Masons. Therefore, a man must become a Master Mason before he becomes a Shriner.

A.A.O.N.M.S. as seen on the tombstone on the bottom at right is an anagram for “A MASON.” Dr. Walter Fleming, a prominent physician, and Billy Florence, a famous actor, founded the Ancient Arabic Order of the Nobles of the Mystic Shrine (A.A.O.N.M.S.), now Shriners International, in 1872.

One thought on “Masonic Symbolism in the Cemetery”