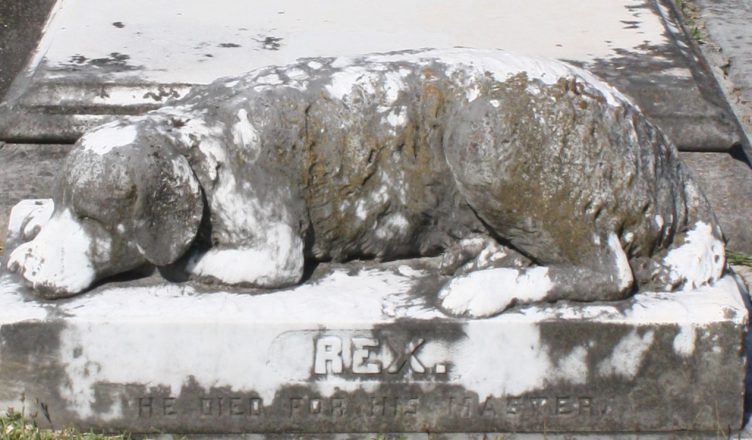 There are many poignant stories of a faithful, furry bestie saving its master. And there are sad stories of grieving dogs that return to its master’s grave day after day. Dogs in the cemetery symbolize loyalty, fidelity, watchfulness and vigilance.

Four of the children of Dr. Josiah Nott and his wife Sarah Deas, represented by the four cherubs to the left, are accompanied by a statue of the family dog at the foot of their grave. Dr. Nott is credited with being the first to suggest that insects, especially the mosquito, could transmit yellow fever. Nott lost his four children to yellow fever in one week in September 1853.

This statue was stolen and replaced with a similar dog painted black.

This sweet puppy earned a pile of sticks for his vigilance guarding the grave of William Boon Redman, (1846 –1854.) The dog is holding a broken chain — symbolizing the loss of a family member. William and his grandfather , Josiah Redman, share a marker in the Spring Grove Cemetery in Cincinnati, Ohio.

Five-year-old Johnny Morehouse was playing with his pet dog by the Miami and Erie Canal when he fell into the water. His dog leapt in after him and tried to rescue the boy, but was unsuccessful. Johnny drowned and was buried at Woodland Cemetery. Allegedly the dog stood by the grave for weeks, waiting for Johnny and subsisting on scraps given him by sympathetic mourners.

Established in 1937 in honor of Key Underwood’s long-time friend “Troop” the Coon Dog Cemetery, in
Lauderdale County, Alabama is the “world’s only coon dog cemetery.”

Dogs buried must have been an exclusively racoon hunting hound dog.

Your Paws Left Prints on our Hearts

“Watch” next to the Starkweather monument.

The dog’s boy Charley is petting him from the grave. This pup receives lots of coins and pebbles for his loyalty.