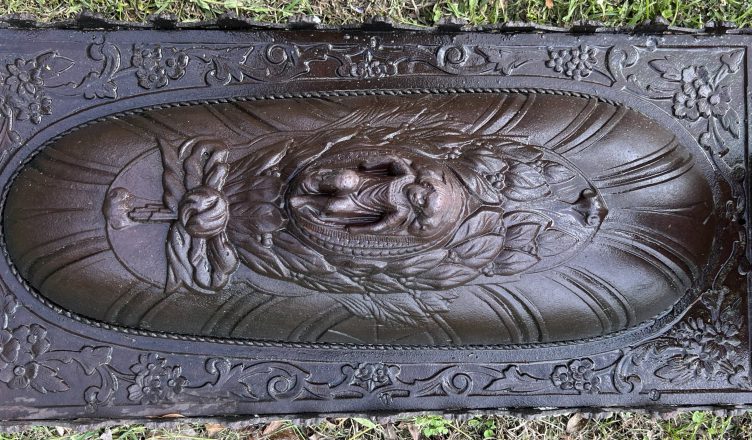 Metallic grave covers, or “mounds erected over graves” were popular in the late 1800’s. They were not only decorative but were also designed to provide protection to the grave-site and remove the need for weeding. Joseph R. Abrams of Greenville, Alabama provided most of the extant covers in the south as well as the Meley Shell Grave Mounds. Robert H. Sipes of Everett, Pennsylvania provided his own, improved design in the north that was impervious to hard freezes in cold climates.

Civil engineer and inventor Joseph R. Abrams of Greenville, Alabama patented his design for a cast-iron grave cover on November 4, 1873. His design was built over a mound of earth, topped with sea shells layered with cement set atop a brick foundation.

The head-plate on the Abrams covers proved to be quite fragile and many have since broken and disappeared, leaving a presently unknown interment. Abram’s head-plates were ornate, Victorian floral designs, frequently topped with a crown.

Abrams bought the “Meley Shell Grave Mound” patent from Jonathan Meley, presumably to use as a base for his cast-iron grave covers. According to the Selma news, the Badge of Honor was awarded to the “Meley Patent Improved Grave Mounds Made of Sea Shells” at the 1871 St. Louis World’s fair.

Abrams recommended that the cast-iron grave covers be painted to avoid rust. This cover in the Magnolia Cemetery in Mobile, Alabama is fairly well preserved though the head-plate is missing.

Robert H. Sipes of Everett, Pennsylvania obtained a patent for a “new and valuable improvement” in grave-covers on July 13, 1875 that was more resilient to northern weather than the Abrams cover.

According to the patent: it is well known that cast-iron grave covers or guards, having the usual box-like form, will not stand the hard freezing of cold climates. The expansion of wet earth when frozen in such covers causes them to crack and become broken.

The Sipes covers included a marble head and foot stone as opposed to the cast-iron Abrams head-plates that typically rusted through and have since disappeared.