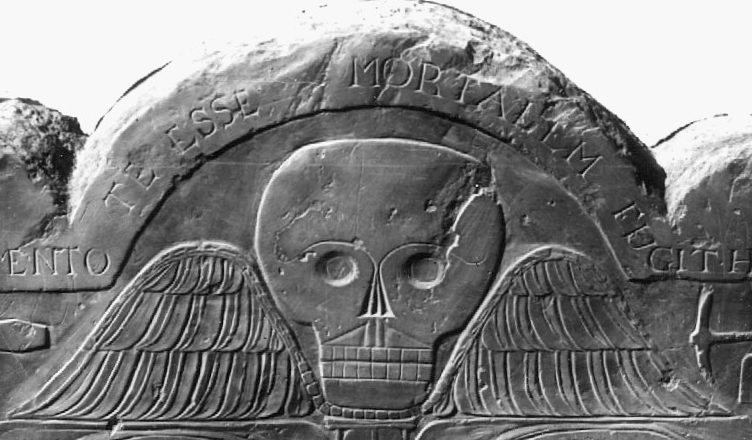 The Old Stone Cutter has been called a “master craftsman” that set the standard for all later carvers in the Boston area. His work is found in Boston area burying grounds on tombstones dated as early as 1625 and as late as 1718, based on stones credited to him in the Farber Gravestone Collection.1 Earlier stones were probably backdated and later stones could have been from stock inscribed after he passed. He is credited with making major artistic changes to New England tombstones as well as developing the death’s head symbol.2 Despite exhaustive research, his identity remains a mystery.

Timothy Riordan, author of The Stone Cutter of Boston: An examination of his work and an hypothesis concerning his identity, presented a circumstantial case that the Old Stone Cutter’s identity is Elias Grice, based on a number of facts that he points out in the Association For Gravestone Studies Markers XXXIV. Grice died in 1684 and is buried in the Granary Burial Ground, across the street from King’s Chapel Burial Ground. Grice’s death year roughly coincides with the end of the majority of the Old Stone Cutter’s work (1670s-1680s). 3

The Old Stone Cutter’s Death’s Head can be identified by the bulbous skull with eyebrows, rounded eyes, teeth, and a double-triangular nose. His use of Latin quotations, rounded finials, combined letters “HE” and “TE” as well as an odd symbol on leading ‘1s’ help to solidify the identification. See Emblems and Hieroglyphics for more information on this tombstone.

The skull on the tombstone of infant Mehetabel Sheafe in King’s Chapel Burial Ground, Boston, Massachusetts, helps to identify this as the stone cutter of Boston. The Emblem, being similar to the Tapping stone above helps solidify the identification. The “HE” in Sheafe is combined, which is one of the identifiers for the Old Stone Cutter.

See Emblems and Hieroglyphics for more information on this tombstone.

Typical Death’s Head credited to the Stone Cutter of Boston. Johana died at the age of 16 months in 1680. The crease in the forehead is specific to the Old Stone Cutter–36 of the 50 death’s heads reviewed had the creased forehead.

This odd character as a leading ‘one’ for a date of death (1679) is a trademark of the Old Stone Cutter.

You can view more images of tombstones credited to the “Old Stone Cutter” on the American Antiquarian Society’s website–The Farber Gravestone Collection.