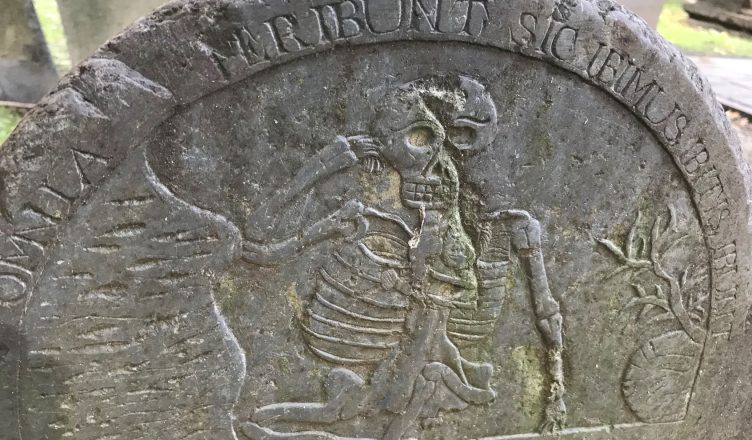 King’s Chapel Cemetery in Boston, Massachusetts is Boston Proper’s oldest burial place. Founded in 1630, the cemetery contains great mortality symbolism. One of the most popular stones is the Joseph Tapping stone (first and second photos below) which can be found at the entrance.

The bottom half of the Joseph Tapping stone depicts a plethora of mortality symbols — Father Time holding an hourglass and scythe next to a skeleton holding a dart while snuffing out a candle.

An hourglass and Death’s Head complete the mortality symbolism on the Joseph Tapping stone. This stone is thought to be one of the first Death’s Head symbols in New England and has been attributed to the “Stone-cutter of Boston.”

This stone depicts a skeleton “snuffing out the candle of life” partnered with Father Time and his relentless hour glass.

Elizabeth Pain’s tombstone features a Death’s Head, Hourglass and a Coat of Arms.

This skeleton is unusual in that s/he is sitting and contemplating. It looks like an infant skeleton is clinging to the skeleton’s spine. The Latin phrase Omnia Peribunt Sic Ibimus Ibutus Ibunt roughly translates to “All Lost So We Will Go.”