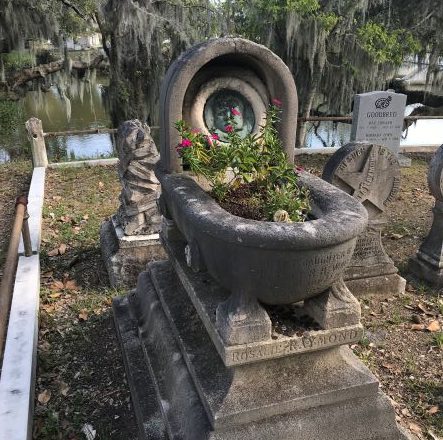 Children are memorialized with a variety of symbols, with cherubs or baby angels being among the most common. The little lamb conveys innocence, and while not as popular as the lamb, we sometimes see a fawn or little rabbit on a child’s grave. Another frequent motif is “Only Sleeping” characterized by a draped child sleeping on a bed of cushions, with tassels and a pillow.

Night floats over the sky–her hair is braided with poppies, representing rest, sleep, peace and immortality (top, right with owl). Her eyes are closed as are the eyes of the children she carries. The owl may also represent solitude, wisdom or watchfulness.

Day (top, left) flies across the sky, dropping roses. She looks over her shoulder on a small boy holding a torch, symbolizing light, eternity and the sun.

Cherubs or baby angels guard the soul of the infant on its way to heaven. The Death’s Head is a symbol of mortality that is typically depicted with a winged skull. The winged skull conveys life as fleeting. Over time, the image softened to a cherub’s head with wings.

While Little Samuel is very popular in the cemetery, his sister (right) has only been spotted in one U.S. cemetery so far. Pampaloni originally carved the “Orphan Girl” and Little Samuel was at that time the “Orphan Boy.”1

The little lamb conveys innocence and is a frequent motif on children’s graves. Multiple lambs are sometimes used to represent multiple children’s deaths.

Children are sometimes represented with other animals such as a dove, fawn or baby bunny.

Four of the children of Dr. Josiah Nott and his wife Sarah Deas, are represented by the four cherubs to the right. Dr. Nott is credited with being the first to suggest that insects, especially the mosquito, could transmit yellow fever. Nott lost his four children to yellow fever in one week in September 1853.

This unusual cradle grave of Rosalie Raymond White (d. 1882) is in the Magnolia Cemetery in Charleston, South Carolina. The face is a “death mask” and is supposed to be a likeness of the child. A death mask is usually made by taking a cast or impression from the face after death.