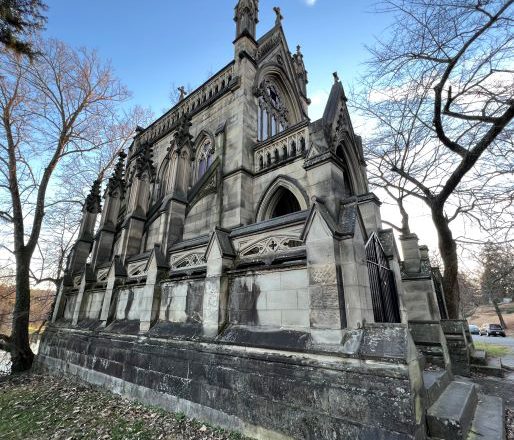 Gothic Influences in the Cemetery

Gothic Revival architecture was most popular from about 1840 through the 1870s in the United States. Launched in part by noted architect Richard Upjohn, his rural church designs were published in 1852 in his book Rural Architecture. Two of the extant Upjohn designed churches in Alabama are connected to graveyards. Saint Andrew’s Episcopal Church and Cemetery, in Prarieville, Alabama and Saint John’s Episcopal Church in Forkland, Alabama.

St. Andrews Church was designated a National Historic Landmark in 1974. It was organized as a mission by Rev. Caleb S. Ives for settlers coming from the Atlantic Seaboard. It was made a parish of the Diocese of Alabama in 1844 and the church was erected between 1853 and 1854.

St. Johns Church was designated a Greene County Historical Landmark by the Greene County Historical and Preservation Society. The parish was organized south of Greensboro in 1824. The first rector, Dr. John Avery, died in 1837. The church, designed by Upjohn, was constructed in 1859 in the Prairie. The building was moved across the Warrior River to Forkland in 1878.

The Belmont mausoleum is an almost exact full-scale replica of the Chapel of Saint-Hubert in the Queens section of Chateau Amboise in France. The Chapel was designed by Leonardo DaVinci in the “Gothic Flamboyant” style.

Complete with gargoyles, the Richards Mausoleum was designed by H. Q. French of New York City. The four gargoyles are carved with the head of a lion, the wings of a bat and talons of an eagle.

This Gothic Revival and Romanesque structure, built for Robert Richards (1830-1888) in the 1880s, is in the Oakland Cemetery, in Atlanta, Georgia.

Caldwell established a large fire hydrant and valve company in New York City. His remains were returned to the Magnolia Cemetery in Mobile, Alabama when he died in 1872.

The Gothic Family Tomb and ornate fence in the Greensboro Cemetery of Hale County, Alabama contains the remains of Jeffries A. Blunt. Blunt died in 1942, so it seems more likely that is was originally built for his uncle, Algernon S. Jeffries.

The Family Tomb, made of cast-iron, was created by the Philadelphia firm of Robert Wood & Co. and was popular in the mid-1800’s. Many of the southern Family Tombs were manufactured by Miltenberger & Co. of New Orleans.

The structure is both a chapel and a mausoleum, with the crypts below and chapel on the entry floor. The design was supposed to be reminiscent of the Sainte-Chapelle in Paris.

The flying buttresses are one of only two buildings with symmetrical buttresses in Cincinnati. The Dexter Mausoleum is registered as a historical landmark.