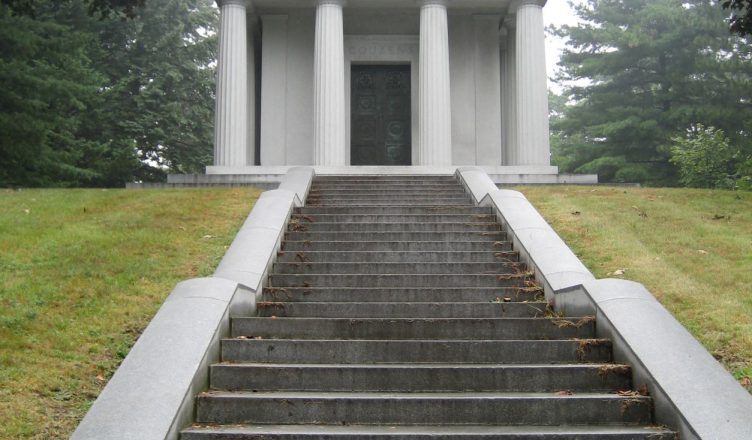 Woodlawn’s grand mausoleums and monuments showcase a living history of individuals who contributed to the vitality of the motor city. Woodlawn’s park-like 140 acres, designed by Frank Eurich, was founded in 1895.

J.L. Hudson (1846-1912), department store magnate, died of pneumonia in England. The Hudson department stores became the third largest in the U.S. in 1927, behind Macy’s and Marshall Field’s.

Clara and William Harrison are buried beneath the most-photographed grave in Woodlawn which boasts a life-sized statue of the Virgin Mary.

The three steps leading up to the statue read “Faith, Hope, Charity.”

Levi Lewis Barbour (1840-1920) was an attorney and “Father of the Park” having been instrumental in purchasing Belle Isle for the city in 1879. His monument is an exact replica of the Scipio Barbatus Sarcophagus, the earliest known Roman sarcophagus.

Horace and John Dodge, founders of the Dodge Brothers motor cars, are interred in an Egyptian Revival Style Mausoleum, flanked by two Sphinxes.

The Dodge brothers passed away from complications related to the Spanish Flu in 1920.

Woodlawn is truly a park-like setting and a walk through history.