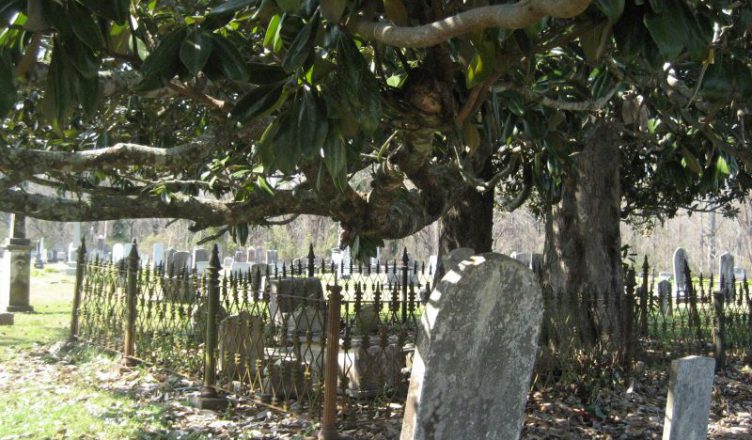 First known as Oak Hill Cemetery, Mesopotamia Cemetery was established around 1822 on present-day Mesopotamia Street in Eutaw, Alabama. Alexander Shaw, a local planter, deeded the property to the trustees of the church in 1833 for the sum of one dollar to “build a church and academy.”

Elizabeth Shea’s marble headstone is in remarkably fine shape, considering that it has withstood the Alabama sun for over 175 years. The symbolism on top of Shea’s monument depicts classic mourning symbols. The willow and urn motif were common symbols of mourning after the Revolutionary War. The column on the left of the willow represents a noble life and the drapery above the inscription represents sorrow and mourning.

In Memory of
Abraham Flinn
a native of So. Carolina
who perished by the explosion
of the St. Boat Tuscaloosa
on the night of the 28th of
January 1847 in the 37th
year of his age.

The deceased was a member
of the Eutaw Rangers, and was
on his return from Mexico
for the restoration of his health
when he was thus suddenly called
from Time to Eternity

In the midst of Life we are in Death
Unveil thy bosom faithful tomb
Take this new treasure to thy trash
And give these sacred relics room,
To slumber in the silent dust

The Duncan Mausoleum is the only mausoleum in the cemetery.

This depiction of a Caterpillar, Chrysalis, and Moth symbolizes resurrection.

The broken chain with a hand coming down from the clouds symbolizes a family member on the way to heaven.