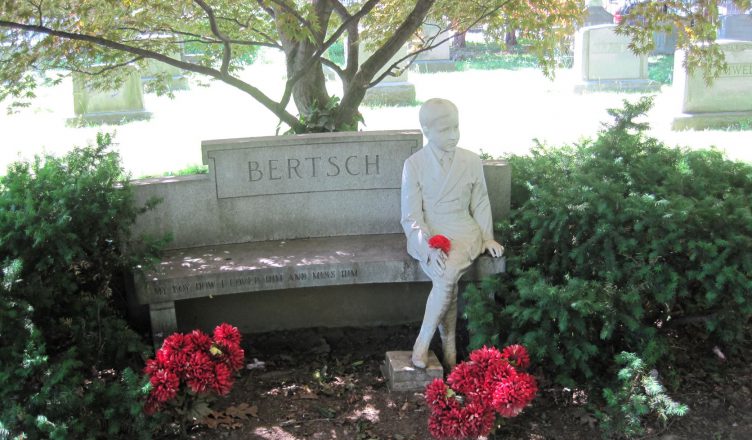 Woodlawn Cemetery, founded in 1863, is one of the largest in New York City and is a National Historic Landmark. More than 300,000 people are interred in over 400 acres that includes over 1,300 mausoleums.

Alva Erskine Smith Vanderbilt Belmont was a wealthy socialite who was also a committed suffragist. She commissioned the construction of the mausoleum as a replica of the chapel of Saint-Hubert at Amboise in France’s Loire Valley, and the burial place of Leonardo da Vinci.

Jabez Abel Bostwick (1830-1892) was one of the founders and original partner of Standard Oil Company, serving as Secretary-Treasurer of the Standard Oil Trust. He died while trying to rescue horses from a stable fire on his estate.

In Memory of Our Only Beloved Son Ensign Nathan Q. F. Piccirilli, Who Made The Supreme Sacrifice For His County at The Battle Of Ormac Bay, Philippines Islands On December 7, 1944

John Warne Gates (1855-1911), made a fortune manufacturing barbed wire and then struck oil and founded Texaco.

The mausoleum’s massive bronze door was created by the famed sculptor Robert Ingersoll Aitken in 1914.

According to the National Register of Historic Places Registration Form:

The mausoleum is constructed in the Egyptian Revival style with two sphinx sculptures flanking the entrance steps. Two columns with horizontal banding and palm capitals frame the recessed entrance. Both the entablature and the lintel above the entrance feature relief carvings of a winged solar disc, an icon that Egyptians believe offered protection to the dead.

The bas-relief panel on the left shows an angel taking the inventory of Thomas Mason’s life and is inscribed with the Latin words Ab Initio, Ad Finem (“from beginning to end”). The panel on the right depicts an angel with a horn, presumably Gabriel, awaiting the results of the inventory. The panel is inscribed with the Latin phrase Sic Transit Gloria Mundi (“thus passes away the glory of the world”).

Memorial To A Marriage

Sculptor Patricia Cronin & her partner Deborah Kass. This sculpture was installed in marble in 2002 before same-sex marriage was legal. In 2011, the marble was replaced with a bronze version. The sculpture depicts the artist and her wife, Deborah Kass, in a loving embrace. Both are still living.

The sculpture of mother and child was commissioned by the Piccirilli Brothers, an Italian family of renowned marble carvers and sculptors.