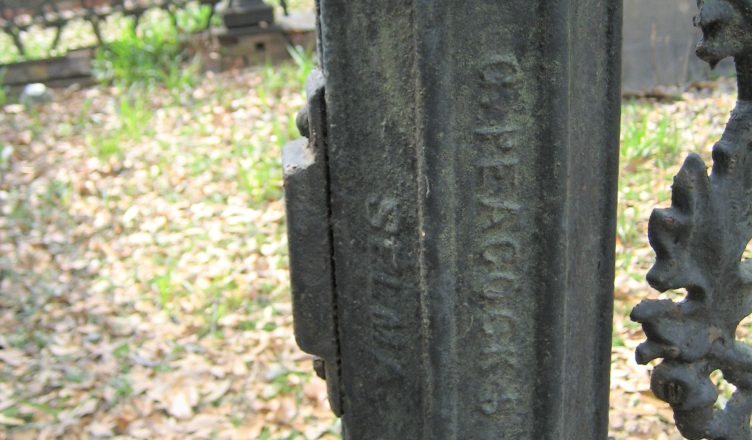 Not all iron manufacturers were from the north. George Peacock, an inventor and owner of Peacock Iron Works of Selma, Alabama was in business from 1866 until his death in 1899. According to the Memorial Record of Alabama: “His aptitude for invention amounted almost to genius.” During the American Civil War, Peacock’s services, as ‘the most expert foundryman then in the South’, were obtained by Commander Catesby. ap Roger Jones, Chief of the Ordnance Works at Selma. Mr. Peacock’s inventive talent was brought into exercise, resulting in an improved method of making shot and shell, by which the molder made four times the number as by the old method, and there was a less percentage of imperfection. The ordnance works became a leading manufacturing center for the South during the civil war, having supplied big cannon to practically every Confederate States army corps, making them a prime target for Union forces. Several of Alabama’s iron producing facilities, including Selma, were destroyed when General James H. Wilson led a cavalry raid into central Alabama just one week before the end of the Civil War. [i]

Established shortly after the Civil War, Peacock Iron Works became one of the best-known iron manufacturers in the Gulf states. Peacock invented self-oiling tram car wheels, rails, and railroad machinery which were the primary products of the iron foundry. Though Peacock did not advertise ornamental iron work, there are some beautiful fences and gates in cemeteries in the south bearing his mark.