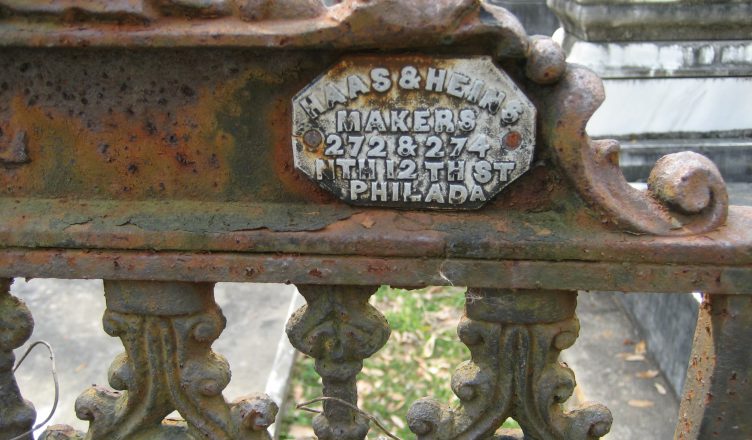 Reuben Haas and George L. Heins were partners in “Heins & Co.” also known as “Philadelphia Iron Works” located on Twelfth Street in Philadelphia, Pennsylvania in the mid-1850s. They advertised railings, doors, shutters and “all kinds of builder’s iron work.” One of their Agent’s early advertisements stated that they “pay particular attention to enclosing Cemetery lots, and and parks, having the largest assortments of Patterns of any establishment in the country, are enabled to please the most fastidious in taste.”

Haas and Heins dissolved their partnership in 1855 when George Heins died at the age of 43. After George’s death, Reuben partnered with George’s 18 year old son John Heins under the name of Haas & Heins. George left his share of the business to his son in his Will dated August 1855, as his son had stepped in for him when he became sick. The assets of Philadelphia Iron Works were sold at auction in Philadelphia in 1873.

Also see Cemetery Fences and Gates and their Makers on this site.

One thought on “Haas and Heins Cast-Iron Cemetery Fencing”