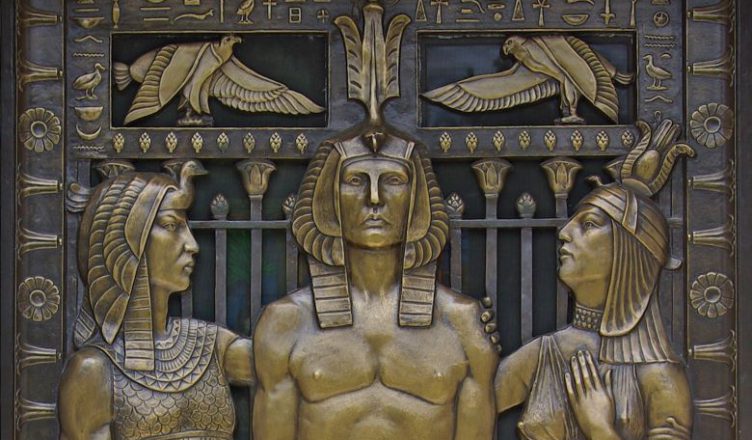 Between the pyramid shaped mausoleums embellished with sphinxes and crawling with beetles, and giant obelisks, Egyptian symbolism is abundant in the cemetery.

The Ouroboros, one of the oldest ancient Egyptian symbols, symbolizes cyclic renewal or cycles of life, death and rebirth. The Uraeus, a snake with its head upright, was an ancient Egyptian symbol for divine or royal authority. Twin cobras facing away from one another represent the spirits of good and evil with the human soul in the middle. A symbol of protection, it guards the gates of the underworld, wards off the enemies of the royals and guides the deceased pharaohs on their journey through the underworld. The winged sun disk is a symbol of royalty, divinity, power, and the soul’s destiny in eternity. The character on the right, above is depicted with a headpiece surrounded by opposing Uraeus.

In Egypt, papyrus was a natural symbol of life itself and the primeval marsh from which all life came. Papyrus pillars were said to hold up the sky.

The lotus (bottom) closes at night and sinks underwater. In the morning it re-emerges and blooms again. Thus the flower became a natural symbol of the sun and creation.

Obelisks are an upright four-sided pillar, gradually tapering as it rises to form a pyramid at the top.

With the face of a human and body of a lion, the mythical Sphinx guards the tomb entrance with aplomb.

The Winter Mausoleum in the Allegheny Cemetery in Pittsburgh is the epitome of Egyptian symbolism. Twin vultures at the top of the door represent the eternal cycle of death and rebirth. Sunflowers interspersed with Lotus run the perimeter of the door, and a myriad of Egyptian hieroglyphs surround the vultures.

The Winter door also depicts the Egyptian cross or Ankh being passed to the Mr. Winter, who is preparing to enter the next world. The English translation for “Ankh” means eternal life.

This Egyptian pyramid mausoleum was designed by Alden & Harlow and built for William Harry Brown, banker and heir to a shipping empire in 1898.