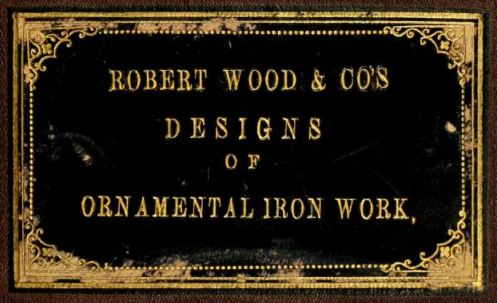 Robert Wood began manufacturing ornamental iron in Philadelphia in 1839. He joined forces with Elliston Perot to become “Wood & Perot Ornamental Iron Works” which was in business from 1857- 1865 [i]. They advertised in newspapers throughout the United States and typically partnered with a local agent to sell their designs, such as their partner Miltenberger in New Orleans. Robert Wood’s 306 page “Designs of Ornamental Ironwork” catalog, published around 1867, includes detailed designs of fences, gates, mausoleums, statuary, chairs, benches and more.[ii]

Wood & Miltenberger erected the Pomeroy mausoleum in Mobile’s Magnolia Cemetery around 1860. According to the Historic American Building Survey, the “mausoleum is faced entirely with cast iron panels which completely sheath a brick masonry structure.”[iii] The maker of the Pomeroy tomb is unmarked, however, the identical Slatter family Tomb bears the maker’s mark of “Wood, Miltenberger & Co, N Orleans, LA.” The cast-iron mausoleum located in Mobile, Alabama’s Magnolia Cemetery is enclosed by an elaborately detailed Gothic Revival cast-iron fence with high gate and corner posts topped by classical urns, which appear to be a replica of designs 195 and 285 in the Wood Catalog (below). Hope Hull Slatter (1790-1853) was a wealthy cotton factor in Mobile.[iv] The Slatter tomb is painted white, which was the recommended color of paint for cast-iron as it highlighted areas of potential corrosion for correction.

An elaborate example of Wood & Perot ornamental iron work is the “Bird Cage” (pictured below) manufactured for President James Monroe’s tomb around 1859. Though Monroe died in 1831, he was re-interred in the Hollywood Cemetery in Richmond, Virginia. The ornate, Gothic-style cage made from cast iron surrounds a granite sarcophagus and was labeled a National Historic Landmark by the National Park Service in 1971, due to its unique architecture.[v]

Interestingly, Wood & Perot were involved in a variety of cast-iron endeavors including statues. According to the Leaf-Chronicle of Clarksville, Tennessee, Wood & Perot statues of two young women representing morning and noon, and a young man representing night were thought to be so scandalous that the governor refused to pay for them. Wood & Perot recast them with more clothing and they were again rejected.

When Wood & Perot dissolved their partnership, Robert Wood became “Robert Wood and Company.”[vi] Wood filed for bankruptcy in 1878, “due to their inability to meet accruing obligations attributed to “the hard times and great difficulty in collecting debts due to us.” The firm’s financial expert stated that “People cannot in these times afford such luxuries as ornamental iron work and statuary.”[vii]

Maker: Appears to be a Wood & Perot Design, The mausoleum was manufactured by Wood, Miltenberger & Co. of New Orleans.

Wood & Perot Gate, #285, from their catalog. Appears to match above Slatter Mausoleum fence.

Miltenberger were agents/manufacturers for Wood & Perot in New Orleans. They called “particular attention to the CAST-IRON MAUSOLEUM or FAMILY TOMB” manufactured expressly for the south.

Maker: Robert Wood or Wood and Perot based on match in catalog (below.)

Maker: Unidentified, appears to be Wood & Perot based on catalog designs.

This gate is identical to gate on Borden Lot in Newbern Cemetery (above).

Appears to be Wood & Perot based on mausoleum on lot.